What is Vitamin D and how do people become deficient? 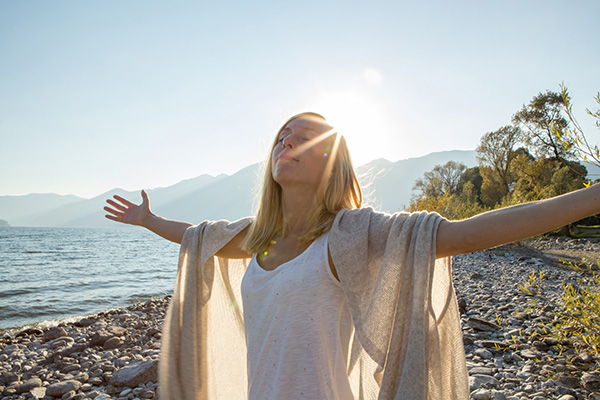 Vitamin D forms in the skin when it is exposed to sunlight. It can also be obtained from some foods. It is important for forming and maintaining healthy bones, and is therefore particularly important for anyone growing – for example pregnant women and children.

Most people should be able to get all the vitamin D they need by eating a healthy and balanced diet and by getting some summer sun. People at risk of not getting enough vitamin D are: all pregnant and breastfeeding women, babies and young children under the age of five, people aged 65 years and over, people who are not exposed to much sun (such as people who cover up their skin when outdoors, or those who are housebound), people taking certain medications, people who have darker skin (such as people of African, African-Caribbean and South Asian origin) and people with certain medical conditions.

The Department of Health advises:

For babies and young children:

You can buy vitamin D supplements or vitamin drops containing vitamin D (for under fives) at most pharmacies and supermarkets.

For adults and children over 5 years old:

During the autumn and winter, you need to get vitamin D from your diet because the sun isn't strong enough for the body to make vitamin D.

But since it's difficult for people to get enough vitamin D from food alone, everyone (including pregnant and breastfeeding women) should consider taking a daily supplement containing 10mcg (400iu) of vitamin D during the autumn and winter.

Between late March/early April to the end of September, most people can get all the vitamin D they need through sunlight on their skin and from a balanced diet. You may choose not to take a vitamin D supplement during these months.

Some people won't get enough vitamin D from sunlight because they have very little or no sunshine exposure.

The Department of Health recommends that you take a daily supplement containing 10-25mcg (400-1000iu) of vitamin D throughout the year if you:

People with dark skin from African, African-Caribbean and south Asian backgrounds may also not get enough vitamin D from sunlight. They should consider taking a daily supplement containing 10-25mcg (400-1000iu) of vitamin D throughout the year.

Is not having enough Vitamin D dangerous?

Mild vitamin D deficiency usually causes no long term effects. It is very common, with more than half of the adult population in the UK having insufficient levels of Vitamin D. Most affected people either don’t have symptoms, or have vague aches and pains, and are unaware of the problem.

With prolonged deficiency the risk of getting osteoporosis is likely to be increased. Severe vitamin D deficiency in children leads to rickets, where the bones soften, and osteomalacia in adults. It may also be associated with some other long term conditions such as heart disease.

What are natural sources of Vitamin D?

90% of our Vitamin D is produced in our skin in response to sunshine. The best way to maintain good levels of Vitamin D is through exposure to sunlight. Exposing your forearms and face to midday sunlight for 20 to 30 minutes 2-3 times per week from April to September is enough to achieve healthy Vitamin D levels that last through the year. People with dark skins need to spend twice as long in the sun to achieve the same effect. People with freckled or very pale skin should take particular care to prevent sun burn. It is important for everyone to use sunblock if they are going to spend longer in the sun.

10% of our Vitamin D comes from our diet. Oily fish (herring, mackerel, salmon, trout, sardines) is the richest source of Vitamin D with lesser amounts contained in dairy products and eggs.

Why is my GP not prescribing me Vitamin D any more?

NHS Camden GPs are now being asked to prescribe vitamin D only for patients who are deficient and not for people with slightly low levels or to prevent a deficiency. The reason for this is that there is no clear evidence that a slightly low Vitamin D level is associated with long term health problems yet the NHS was spending large sums of money prescribing Vitamin D to these patients. This money could be better used for treatments which have been shown to improve people’s health.

Vitamin D tablets or capsules can be bought from pharmacies (chemists), supermarkets, health food shops or online. It may also be labelled as Vitamin D3 or cholecalciferol. Look out for the ones with at least 20 micrograms (µg or mcg) which is equivalent to 800 units (iu) of Vitamin D.

All women who are pregnant or breastfeeding and all children between the age of 6 months and 5 years should take a daily supplement which contains Vitamin D. You do not a prescription to obtain these supplements. They can be obtained through the NHS Healthy Start scheme. Healthy start vitamins are FREE to those eligible for the Healthy Start scheme, and if not they can be bought very cheaply (about £1 per month for an adult).

What does my blood test result mean?

If your Vitamin D level is higher than 50, it is considered to be normal.

Having a Vitamin D level  higher than 50 is not associated with long term health risks and, in most people, would cause no symptoms. You do not require any specific treatment.

If your Vitamin D level is between 25-50, it is slightly low.

Certain patients have specific medical risk factors which put them at risk of long term Vitamin D deficiency and they may be prescribed Vitamin D by their GP. 1 month after they have completed the course they should do another blood test to check their Vitamin D and calcium levels, and then discuss whether they need longer term Vitamin D supplements.

If your Vitamin D level is below 25 it means that you are Vitamin D deficient.

You should take the high dose of Vitamin D prescribed. 1 month after you have completed the course you should do another blood test to check your Vitamin D and calcium levels, and we can then discuss whether you need longer term Vitamin D supplements.